The Gesellschaft für Informatik e.V. (GI) has appointed three scientists as "GI Fellows" - among them Prof. Dr. Stefan Wrobel, Director of the Bonn-Aachen International Center for Information Technology (b-it)  and Professor of Computer Science at the University of Bonn. With this award, the GI honors personalities who have rendered outstanding contributions to computer science. Stefan Wrobel particularly impressed the jury with his fundamental scientific contributions as well as his transfer work for applications of Artificial Intelligence (AI) and Machine Learning (ML).

On the occasion of the annual conference of the Gesellschaft für Informatik e.V. (GI), which took place in the heart of Hamburg at the end of September, Prof. Dr. Stefan Wrobel was honored as a GI Fellow. With this award, the Gesellschaft für Informatik e.V. (GI) honors  Computer Scientists who actively promote the sustainable advancement of computer science, enhance the reputation of computer science at home and abroad, or enrich the GI in a special way through their dedicated work. "Our Fellows are people who have helped shape and advance our organization. With this appointment, we want to honor them and encourage them to continue to work for a sustainable and responsible computer science." With these words, Christine Regitz, President of the German Informatics Society, presented the Director of the b-it with his certificate.

"Being named a GI Fellow is a great honor, and I am really looking forward to continuing to work together with everyone in the Gesellschaft für Informatik for a powerful and humane digital society and economy in the future. Artificial intelligence is already shaping our everyday lives and offers us great opportunities. In the GI, people from the IT sector, research and companies join forces to help ensure that we can exploit this potential in our interests," said Stefan Wrobel, expressing his thanks and appreciation.

The GI jury was impressed, for instance, by Stefan Wrobel's early scientific work in the field of Machine Learning in particular, which has enabled him to make decisive progress. In the past, he has already been honored for his research as one of the ten formative minds in German AI history.

His research focuses on Hybrid Artificial Intelligence systems that combine Machine Learning with knowledge technologies and human expertise. In its assessment, the jury also emphasized that Stefan Wrobel's theoretically well-founded work has led to a wealth of concrete industrial applications and has thus widely promoted the transfer of technology to industry.

In the GI, Wrobel is particularly involved in the specialist group Knowledge Discovery, Data Mining and Machine Learning as well as for the journal "Artificial Intelligence". Through his participation in numerous GI conferences, he has contributed significantly to establishing AI and data mining in Germany with successful applications since the 1990s.

He is also the managing director of the Bonn-Aachen International Center for Information Technology (b-it) and co-director of the Lamarr Institute for Machine Learning and Artificial Intelligence, one of the central German AI centers of excellence recently permanently established as part of the national AI strategy.

Stefan Wrobel has been working for many years on aspects of digitization, in particular on intelligent algorithms and systems for analyzing large amounts of data, as well as the influence of Big Data/Smart Data on the use of information in companies and society. He is the author of a large number of publications in the fields of Data Mining and Machine Learning, a member of the editorial board of several leading journals and a founding member of the International Machine Learning Society. He has already been honored by the Gesellschaft für Informatik as one of the formative minds in German AI history. 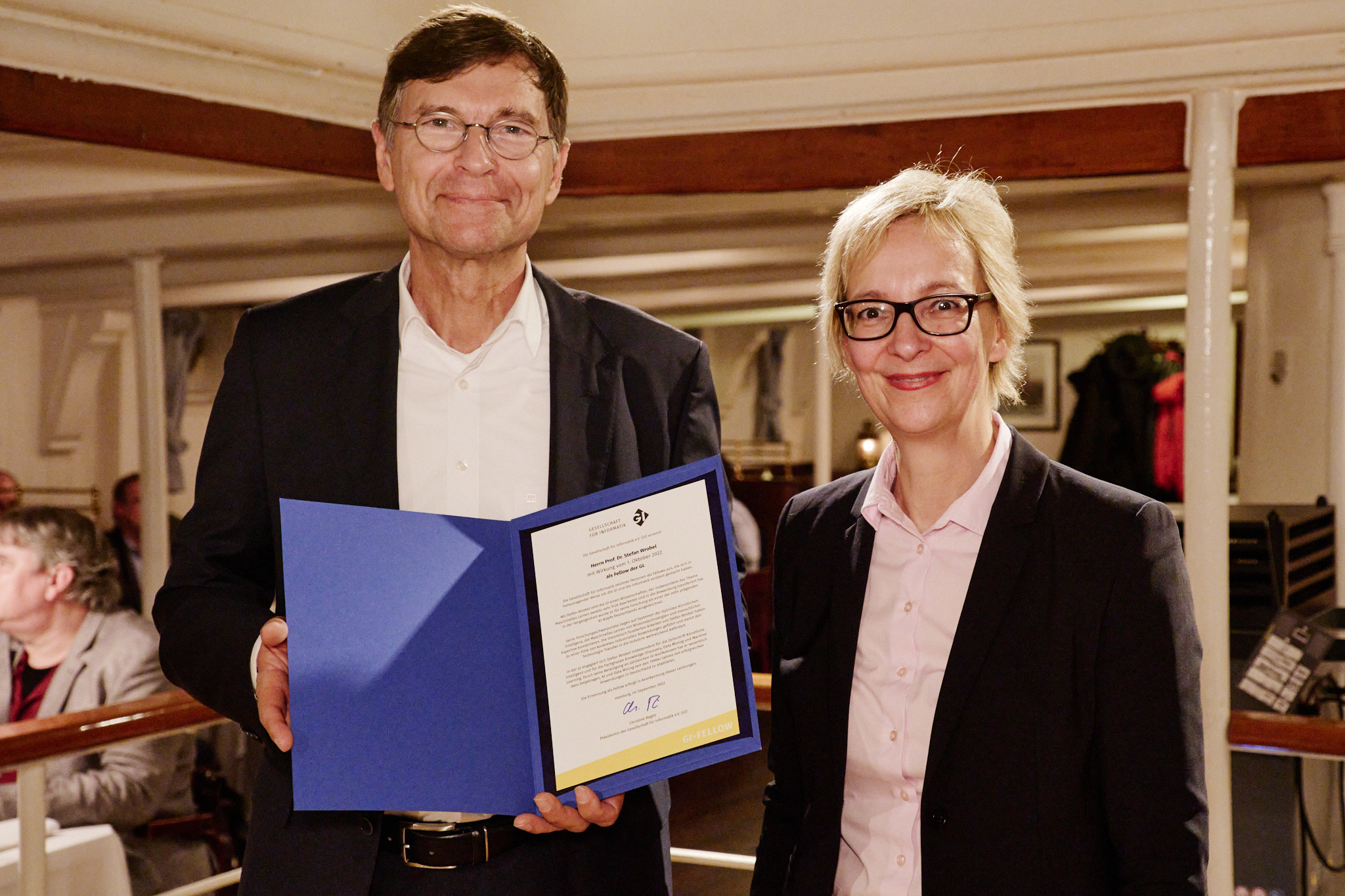 Prof. Dr. Wrobel is new "Fellow" of the Gesellschaft für Informatik e.V. (GI). He received the certificate from GI President Christine Regitz for his commitment to the fields of AI, ML and Data Mining.